Here we are, 3.5 weeks into Spatial Networking. I haven't had too much time to blog ... starting a new company keeps you busy :) !! So far I've really been enjoying it. As I have mentioned before, I am a big fan of Marc Andreessen's blog - he has a lot of great insights into doing startups, and technology businesses in general. One of my favorite posts there is on why not to do a startup, and a lot of that resonates with me already (but no, I'm not changing my mind!).

I have founded one startup before, Ten Sails (now Ubisense), but this one feels very different. At Ten Sails we had four co-founders - myself, Richard Green, Martin Cartwright and David Theriault. Richard and David were both founders of Smallworld before that, so they had been through it before. Richard was the CEO and, while we all had input, he was really driving the company direction. And Martin is an experienced CFO and took care of all the finances, as well as contractual and legal issues - all the sort of things I was happy to ignore as CTO! But this time, according to the official formation documents, I am company President, Chief Executive Officer, Treasurer and Secretary, so there's no hiding from any of that stuff!

Another big difference is that this time we have a very clear idea for a product and have launched immediately into product development, which wasn't the case with Ten Sails, where we spent some time exploring various ideas after we had formed the company. We're in a space, social networking (and location), where there is a huge amount of activity going on, and so far we haven't seen anyone else doing what we plan to do - but that puts a real feeling of urgency into getting our product out as soon as possible, before someone else gets there.

First, and most importantly, realize that a startup puts you on an emotional rollercoaster unlike anything you have ever experienced.

You will flip rapidly from a day in which you are euphorically convinced you are going to own the world, to a day in which doom seems only weeks away and you feel completely ruined, and back again.

And I'm talking about what happens to stable entrepreneurs.

I'd put myself in the pretty stable category, but there's definitely a strong element of this. I feel very confident that we're going to build a compelling application and have a great chance of getting millions of users ... but then I get rather nervous whenever I'm listening to a conference presentation or reading a blog about interesting new location-related startups, in case I come across someone doing the same thing ... but that hasn't happened so far :).

One of the other things that Marc says is that in a startup "absolutely nothing happens unless you make it happen", and I would certainly vouch for that, at multiple levels. I get to alternate between interesting things like designing a system architecture for handling tens of millions of spatial transactions a day and inventing pioneering new interface ideas, and rather less interesting things like sorting out the new office table which is defective and doesn't fit together, and organizing bank accounts, insurance, office space, etc. But hopefully most of the items in the second group are done now, and I can really focus my efforts on the first group! I'm outsourcing as much of the non-technical work as possible, and have signed up vcfo to provide financial services and KKO to provide legal services.

As I have mentioned in passing, I have two contract developers working for me, who are both doing a great job, Glen Marchesani and Nate Irwin. The first week we spent working around the dining table in my loft (not quite the traditional garage, but I really don't have a garage, just a spot in an underground parking lot which wouldn't work so well :) )... 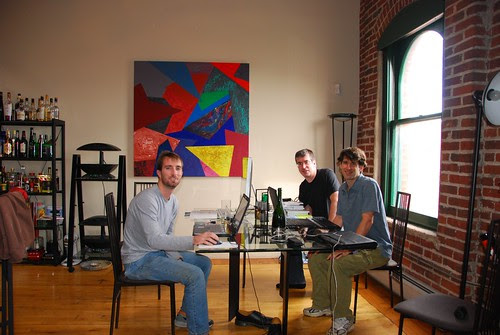 ... but now we've graduated to a cool and funky little office space inside Denver Union Station, which has a good startup feel to it ... 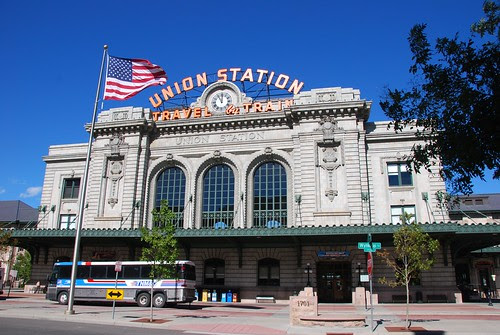 It's about a 100 yard walk from the door of my loft building to the door of Union Station, so that's a little more convenient than the 8 hour, 2 flight, 1000+ mile trip I used to have to get to my Intergraph office in Huntsville.

On the technical front, we have spent a little more time on installation and setup of our environments than I had hoped, but nevertheless we've made good progress on our design and initial development work. We had initially been looking at using Ruby on Rails, but ended up deciding to use Java on the middle tier. The biggest single factor in the decision was Glen's extensive experience and skills with Java, but there were a number of minor technical considerations too. We're still planning to use PostGIS as our back end database, though we're also looking at building a custom file-based caching mechanism for certain aspects of the application. We're currently using Media Temple as our hosting provider, but are thinking seriously about using Amazon EC2 and S3 when we roll out, especially now that Amazon has added new "extra large" servers with 15 GB of memory, 8 "EC2 Compute Units" (4 virtual cores with 2 EC2 Compute Units each), and 1690 GB of instance storage, based on a 64-bit platform - these servers should work well for serious database processing. These cost 80c per hour, excluding network traffic and external storage. A really attractive aspect of this "utility" approach to computing is that we can fire up a number of very high end machines like this to do high volume performance testing up front, but just pay for the time we are using them, and then scale back to a smaller configuration (with correspondingly lower cost) in the knowledge that we can scale up as necessary as we grow.

We will also be leveraging the Facebook Platform heavily in our first release, and I'll talk more about that in a future post. One of the exciting - and slightly scary - things about this is that there are several examples of Facebook applications growing to a million plus users within a month of launching, which is hugely faster growth than you would expect with traditional old school Internet applications back in 2006 :). And our back end processing needs are much heavier than most Facebook applications, so we have to put some serious effort into scalability. Obviously there's no guarantee we will grow anywhere near that fast, but we have to plan for that eventuality.

Between the ability of Amazon to allow us to scale up hardware on demand, and the ability of Facebook to deliver huge numbers of users and provide a good amount of core application infrastructure to us, I think it's pretty interesting that we can be seriously contemplating the possibility that we could have millions of users running a very sophisticated application within six months or so, and yet still have only a handful of people in the company. Or we might not of course, that's the emotional roller coaster part :).

Well, you read it here first - Microsoft announced that they are indeed supporting KML now. They have announced some other really nice looking enhancements too, especially leveraging some of the techniques they developed in Photosynth for display of birds eye imagery. More coverage at SharpGIS, Google Earth Blog, James Fee, and a cool video at the Virtual Earth Blog.

Name a country which begins with U

Following Miss South Carolina's much posted video, here is an Australian TV show's investigation into whether it is true that Americans don't know much about "the very world their country runs" ...

I discovered a nice little touch on the iPhone which I hadn't previously been aware of. A friend sent me an email with a link to google maps showing his address. I happened to click on that link in my email on my iPhone, and it intercepted the link to maps.google.com and instead showed me the address in the local version of Google Maps on my iPhone. I thought this was a nice little usability touch which is typical of Apple's attention to detail in this area.
Posted by Peter Batty at 1:01 PM No comments:

I've been busy so haven't been paying such close attention to the blogosphere as usual, so I may have missed something, but I haven't seen much comment on the fact that Google announced on the Google Maps API blog that they are changing their approach to limiting geocoding requests (one of the Google developers at FOSS4G alerted me to this). Previously they required an API key, and limited you to 50,000 requests per day (which would typically be on a per server basis). Now they are switching to an IP-based system, which allows 15,000 queries per IP address per day (with no API key required), so if you use client side geocoding then you can process orders of magnitude more geocoding requests in your application than previously. This is good news for us at Spatial Networking as we were concerned about exceeding the 50,000 limit pretty quickly. For people currently using server side geocoding, it may not be such good news as they may need to modify their application to use client side geocoding (depending on their transaction volumes).
Posted by Peter Batty at 6:22 PM 3 comments:

I came across this intriguing approach to image resizing via TechCrunch and The Guardian. Interesting in its own right, but it also struck me that it could be very applicable to producing schematic maps. The 4 minute video is well worth watching.

Someone else has produced an online demo based on the idea, and the paper mentioned is available at the site of co-author Ariel Shamir.
Posted by Peter Batty at 8:22 AM 6 comments:

Spatial Networking is under way

Today was our first day of work as a team at Spatial Networking - our two developers Glen Marchesani and Nate Irwin were both in Denver (Nate is local but Glen is based in Tennessee) and we had a good day going over what we plan to do. We were privileged to have Michael Jones, CTO of Google Earth and Maps, join us for dinner in the evening to celebrate our new venture - he just happened to be passing through Denver today. Stay tuned for more developments! 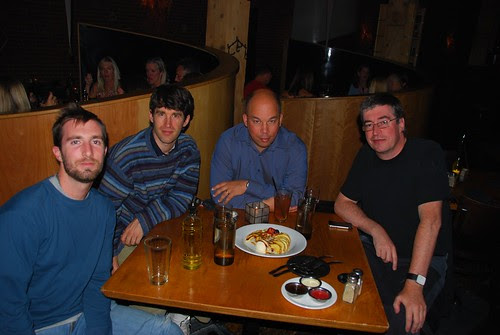 Nate, Glen, Michael and me at dinner
Posted by Peter Batty at 10:53 PM 1 comment: