Now that wherecamp5280 is out of the way for this year, I'm getting excited about organizing FOSS4G 2011 here in Denver next September (in case you missed the news, I'll be the conference chair). This will be a rather larger event - we're expecting 1000 or so attendees.
I walked down to the Sheraton in downtown Denver the other day to take some pictures for marketing purposes (for the web site and brochures, etc), and I really think it's going to be a great venue for the conference. Here are some pics ... 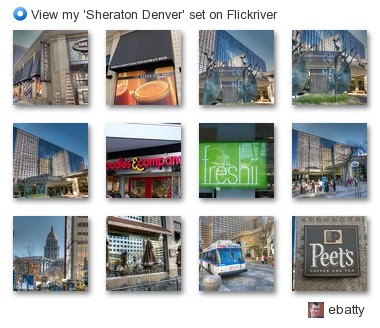 All the conference sessions will be within the hotel itself, and a large new bar connected to the hotel lobby is nearing completion, which will have 130 different beers on tap (I will try to do my conference chair's duty and sample all of them once it opens, later in December!). So that should all be conducive to great socializing and networking. Right across the street there's an excellent assortment of reasonably priced "fast but fresh" food places, so loads of convenient food options very close by, though of course the conference will be well catered! Plus there are literally hundreds of bars and restaurants within walking distance - the location gets an outstanding score of 95 for walkability at walkscore:

Walk Score
On top of that, there are free shuttle buses that run continuously up and down 16th Street right outside the hotel, which makes it easy to get a little further afield around the downtown area.
I'll be sharing lots more about the conference plans over the next few months, stay tuned!
Posted by Peter Batty at 6:38 PM 1 comment:

WhereCamp5280 review, and thoughts on unconferences

Last week we held the second annual wherecamp5280 unconference in Denver, and I think it was a great success again. The first one was organized by me, Eric Wolf and Ben Tuttle, and this year Steve Coast took the lead on organizing the main day while I did the social event, Chris Helm and Sean Gillies organized a hack day beforehand (aka hooky bobbing, courtesy of Sean, a new term to me I have to admit!), and Hurricane Coast took the lead on a follow up ski (and xylophone) mapping event. There have been several good reviews already from Andrei, James and Michael. 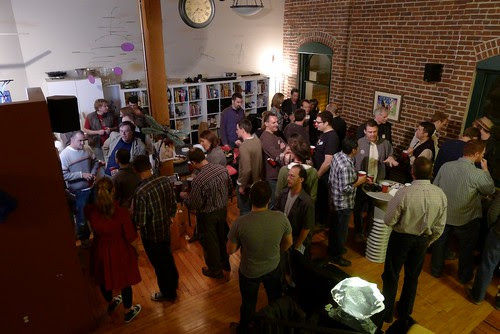 As those reviews mention, a couple of big hits in terms of topics were Google Fusion tables (unfortunately I missed Josh Livni's talk as I had to leave early to organize the party) and a lot of interesting discussion around HTML5, Polymaps and other items relating to handling vector graphics in browsers - Chris Helm did a great ad hoc talk on the latter topic which generated a lot of good discussion, and there was a lot of discussion at the hack day on this. I also enjoyed Eric Wolf's talk about the work that USGS has been doing with the OpenStreetMap software stack combined with USGS data, and Steve Davis's talk on how he created some really nice basemaps for City of Atlanta. I felt the overall event was a good integrated mix of "neo" and "paleo" topics and experiences, without using those labels or worrying about them (which is how it should be).
I felt, as did several others I talked to, that last year's event was excellent but this year's was even better. There were actually fewer people this year, 70-something versus 100ish, but a stronger set of sessions this year and more interaction, as well as more people at the party :) !! There was a great assortment of interesting geo-people, and a (pleasantly) surprising number who flew in from out of town. I go to a lot of conferences, and continue to think that the unconferences I've been to rank right up there with the best events I've been to. Steve wrote a post with his perspectives on organizing an unconference, and how it took 6 hours of his time (which excludes the party organization, by the way!). This raises the interesting question of whether all the time that people invest in traditional conferences is really worthwhile (especially since I'm chair of the upcoming FOSS4G event!), and for small events I think it really is a valid question, though I don't think the unconference model can scale up too much or it loses its informality and interaction, which are really the things that make it so good. The 75 people or so that we had this year felt like a good size.
This year we had less organization than last year. There was only one pre-arranged talk this year - Steve asked me to do a short 20 minute keynote to kick things off, and that was only fixed a week in advance, and wasn't publicized ahead of time (now everyone knows why Steve was busy beforehand). The previous year we did a little more to get a few speakers lined up ahead of time and we publicized them and potential talks. We felt we needed to do that in order to get reasonable attendance, and to persuade sponsors to support us, since it was the first time we were doing the event, and a lot of potential attendees really didn't know what an unconference was all about. Personally I don't think that those slight differences in "pre-organization" made a material difference to why this year was even better than last year. It's really down to how many people come ready to talk about interesting things, which more people did this year. And it's hard to manage that or predict it, but I think a lot of it has to do with it being the second year of the event, and we had such a great buzz this year that I'm sure that will contribute to another great event next year! Talking of which, there was some casual discussion afterwards about whether there would be a wherecamp5280 next year, since we have a geo-extravaganza of bigger conferences coming to town, and a lot of us who have been involved in organizing wherecamp5280 will be heavily involved in those. I think there was a sentiment that people would like to keep it going and not lose the momentum that we have. And that momentum should mean that it will take even less than 6 hours to organize next year :), so I think it's highly likely there will be another one in 2011, probably earlier in the summer. 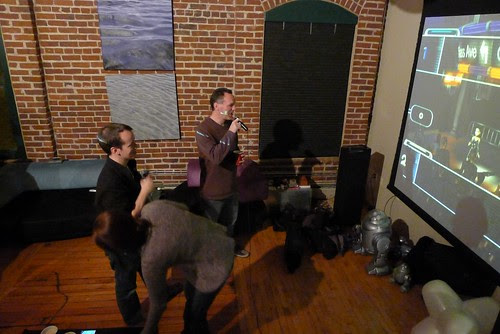 And last but not least those who stayed late at the party got to witness a quite extraordinary sequence of geo-karaoke duets from the legendary James Fee and Andrew Turner. I am still debating whether to release some video footage or whether to honor James' plea that "what happens at wherecamp5280 stays at wherecamp5280" :).
Posted by Peter Batty at 10:40 AM 2 comments: