New whereyougonnabe release, including support for Fire Eagle and GeoRSS

This week we added quite a number of new capabilities to whereyougonnabe, including support for Fire Eagle and GeoRSS, substantially expanded help documentation, improved synchronization capabilities, support for SMS, and exclusive use of Google Local Search in the whereyougonnabe browser application, as discussed previously (having introduced this approach for external sync in the previous release). For more detail on the new functionality from a user perspective see the whereyougonnabe blog - I'll touch on aspects of this here, but also discuss a little more of the technical background.

As most readers of this blog probably know, Fire Eagle is a service from Yahoo that is essentially an independent location broker supported by a number of applications which use location. You can sign up for free, and authorize applications to update and/or read your location. In the case of whereyougonnabe, we update your location automatically based on the plans you have told us about in advance. So for example, if you are using our Tripit interface, just by forwarding a single email with your itinerary, we will update your location throughout your trip, indicating the airports and cities you are in.

I really like our new RSS feed capability, which lets you easily view data from whereyougonnabe from outside the application, for example in web home pages like My Yahoo or iGoogle. The following is an example: 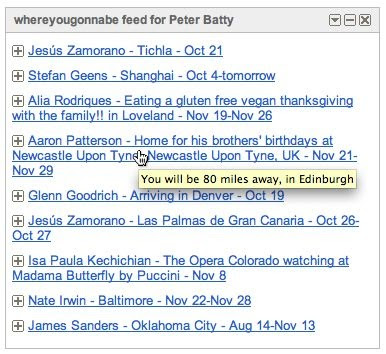 The content of the feed uses a similar algorithm to the one we use for WYTV, with a somewhat random mix of activities from your friends which will close to you, and some which won't. While a major focus of the system is of course identifying opportunities to meet friends, another important aspect is just keeping in touch with your friends. This is similar to using Facebook status or Twitter, but we have more information about an activity, including its location and time, which lets us select "interesting" items more effectively (for example, activities further from home will probably be more interesting than those close to home, in general).

You can click through on any element in the RSS feed to see more details in whereyougonnabe: 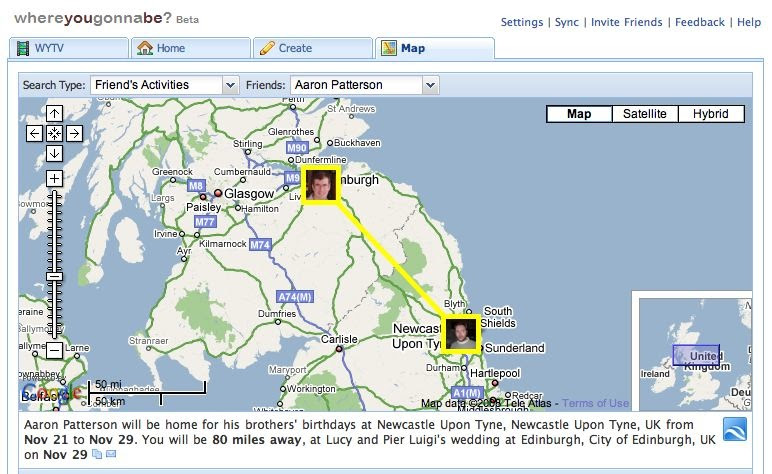 This ability to link directly to a specific activity in whereyougonnabe is new with this new release. We now use these links in various places where you see data outside whereyougonnabe, including Facebook status and newsfeeds, Twitter messages, and iCal feeds. People will only be able to see the details if they are authorized to do so (i.e. typically if they are your friend on Facebook). We see this as an important development in terms of integration with other systems, and in encouraging people to use whereyougonnabe more often.

As I mentioned above, the RSS feed is actually a GeoRSS feed, so you can display elements on a map in software which supports GeoRSS, such as Google Maps (just copy the feed URL into the search box): 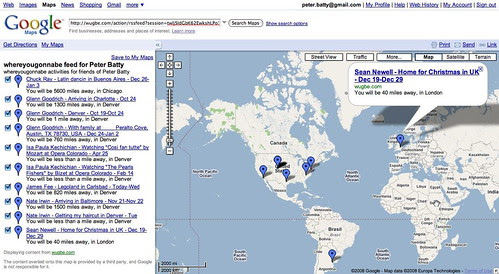 Lastly, we have made various enhancements to the synchronization capabilities, including a sync on demand capability which gives you feedback on what is happening with the sync, which is helpful in confirming that it is working as expected, and/or diagnosing any problems.

There are several other functional improvements in the release too - as I mentioned, you can read more about these at the whereyougonnabe blog.
Posted by Peter Batty at 3:25 PM