I came across this interesting post from Nick Black saying that Oxford University (my former hangout) is now using data from OpenStreetMap on its web site for detailed maps, as its data is better than Google Maps for Oxford. Since I know the city well I thought I'd check it out. Here are a couple of sample screen shots around my old college, Balliol.

Here's a screen shot from the Open Street Map version (for live version click here and zoom in): 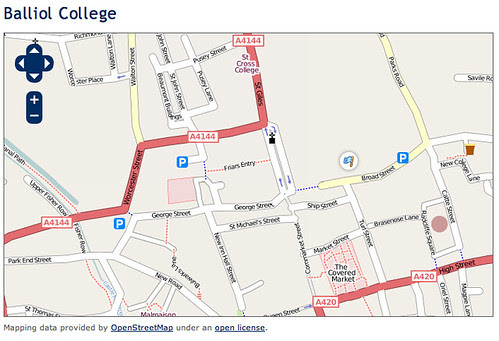 Note all the footpaths and alleyways, of which Oxford has a lot. On the west side it includes a footpath along the canal and on the east side it shows an all important very narrow alleyway off New College Lane which leads to a great old pub called the Turf Tavern, which is easily overlooked. It also correctly shows that Broad Street is no longer a through street, which is a relatively recent change (some time in the last few years, not sure exactly when). None of these details are shown on the following Google map (for live version click here): 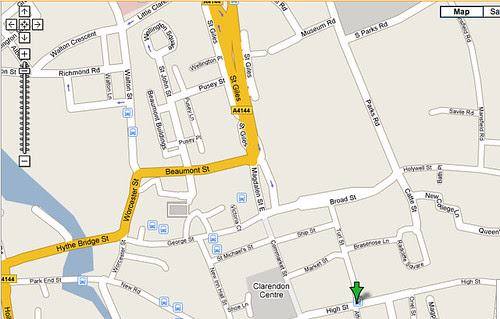 OpenStreetMap is probably something that people are less aware of in North America than in Europe - for those not familiar with it, the following description from their site sums it up pretty well:

OpenStreetMap is a free editable map of the whole world. It is made by people like you.
OpenStreetMap allows you to view, edit and use geographical data in a collaborative way from anywhere on Earth.

So it's essentially a "crowdsourcing" approach to geospatial data collection. There was a lot of interest in OpenStreetMap at the FOSS4G conference this year. I had been impressed with everything I had seen about the project, but I have to confess that I had been thinking of it mainly as a "cheap and cheerful" (cheap=free) alternative to other more expensive but higher quality data sources. It is interesting to see that it has already moved past that in some locations (though obviously not all) to where it is more comprehensive and more up to date than data from commercial sources - this is just a taste of things to come in this regard, I am sure.
Posted by Peter Batty at 5:14 PM

There's an interesting example of crowdsourcing at the Other Place too - the Cambridge Cycling Campaign has a route planner that allows users to edit its network of cycle routes arounds Cambridge.

Mapperz generated a animated gif in the City of Oxford
http://mapperz.blogspot.com/2007/09/mapnik-openstreetmap-google-maps-api.html

You can see the differences.

Even mpre impressive is how much more data there is now, compared to a year ago!