Just before I launched my blog, I added in some tracking capabilities from StatCounter. This is probably old hat to all you seasoned bloggers and webmasters out there, but I was really pretty impressed with the amount of detail this provided, including a Google maps based display of where visitors were coming from, as well as the referring web page, if any. Below is a map from Sunday evening showing recent visitors. This was before any widespread announcement of my departure, but it was announced to Intergraph on Thursday last week so word had obviously got out a little, and most of these hits were links from my personal site ebatty.com, where I added a link to my new blog on Saturday night. But in several cases I would see a hit from someone who had followed a link from ebatty, followed by several more from the same area, or company, with no referring web link, which presumably meant that the direct link to the blog had just been passed on by email. 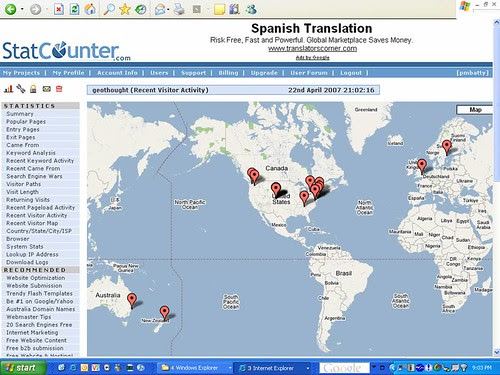 On Sunday someone in Sydney, Australia, using a Safari web browser, entered a google search on "Batty CTO Intergraph leaving", which actually returned my new blog even though it had only been up for a day, which I was pretty impressed with - I guess Google must crawl blogspot sites frequently on the assumption that they have a high update rate. I originally assumed that they had heard a rumor and initially found my blog site via Google, but on closer inspection I could see that they first went to ebatty, linked to the geothought blog, and then searched on Google to try to find more information, but the only relevant thing which turned up was the blog they had already seen. I mention all this just to illustrate how much detail these logs can show (which again will not be news to many people, but I am sure it is to some). In many cases a person's company name can be identified, and in some cases even an individual, for example the following access by my brother in London identifies him by name (and shows that he is another Mac user): 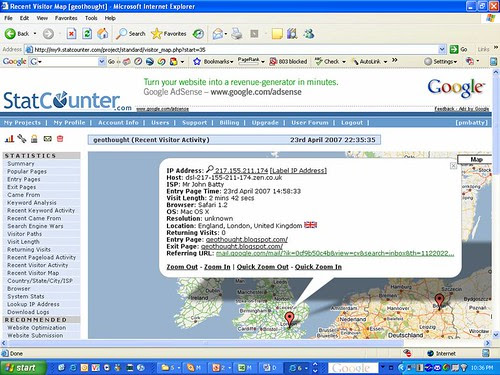 This morning All Points Blog put out the news, and Glenn Letham at GISuser also picked it up, and via these two blogs the news also showed up on Planet Geospatial. So quite a few hits came from those sources, but still by far the majority came with no referring link, so presumably the link to the blog was passed on via email, and this was the primary way that the news spread around. The total up to this point (after the blog has been up for one day "private" and one day "public") is as follows:

This may only be of interest to me, but the other sport today was seeing whether the blog would get more hits from ESRI or Intergraph. The results were:

I guess this makes sense since it wasn't new news to Intergraph people - or perhaps they were all just busy doing productive work unlike those ESRI guys who obviously sit around surfing the web all day ;) !!

One issue with the Statcounter maps, which is a pet peeve of mine with various online mapping sites, including Google MyMaps and Yahoo Maps, is that when you need to display a lot of markers, the map display is split into multiple "pages" with a different set of markers on each (split arbitrarily between pages). Even if you zoom into a small area, you have to flip though multiple pages to see all relevant markers for that area. It really shouldn't be that difficult to set things up in such a way that as you zoom in, and reduce the number of markers which need to be displayed, you do away with the multiple "pages" - this would be much more useful. A simple generic solution to this issue would be a good thing!!

And finally, in total my new blog got hits from 22 countries and 33 states in its first 14 hours of public existence, which is not bad for its first day ... I'm sure the novelty of these tracking statistics will have worn off by tomorrow and I won't go on about this sort of stuff any more (though I would quite like to produce a time sequenced KML file showing the spread of news ... will put than on my list of educational projects to play with).

"On Sunday someone in Sydney, Australia, using a Safari web browser ... "

Pretty impressive Pete ... guess I'll have to use an anomyzer proxy & ip-recycler in future !

BTW. Good luck with whatever you do next Pete.