I have heard from several Microsoft people that they had created a 3D model of New York City but it just hadn't gone online yet. So I was pretty excited to see the Virtual Earth for Government blog announce that this was now live and "man is it ever cool" - and they have a very cool screen shot to back it up. But sadly when I flew over to New York, I just saw a handful of 3D buildings on a flat map :( ... hopefully it will be there for us non-Microsoft people soon, but not quite yet I guess. 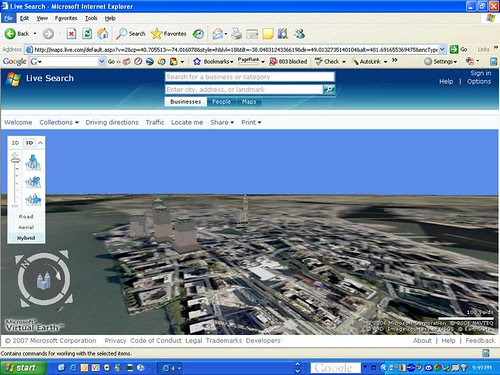 I flew back over to Denver, which does have a very cool 3D model, and saw an advertising banner for the first time - I have seen talk that Microsoft was going to add banners in, but this is the first one I have actually seen. It was a large banner for the movie Eragon, suspended above the Denver Performing Arts Center - here's a screen shot. 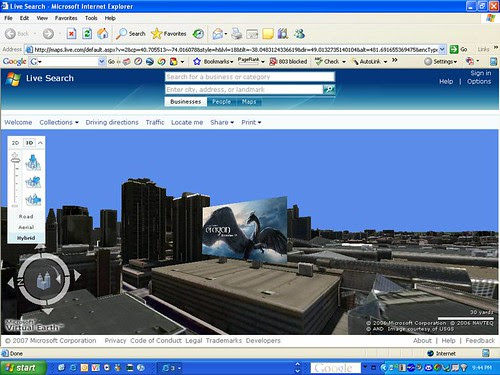 One cool thing about Virtual Earth which doesn't seem to me to have been very widely publicized is that it works with an XBox 360 controller - you can just fly around using the joysticks and buttons, which is much smoother and easier than using a mouse and keyboard. After someone from Microsoft showed me this, I went and bought an XBox controller just for this!
Posted by Peter Batty at 9:53 PM

Hi Peter - I think the author of the blog post you are referencing was using an internal build of VE. The New york buildings aren't on our public servers just yet. I'll have an update on the virtual earth blog when they are really there :-)