I recently bought two new navigation / LBS (Location Based Service) devices, each with integrated GPS and wireless communications. One cost $299.99 (with a 2 year contract), a Blackberry 8800, and the other cost around $27,000, a Toyota Prius. In addition to its LBS capabilities, the Prius also provides functionality to transport you to your chosen location in an environmentally friendly way :). 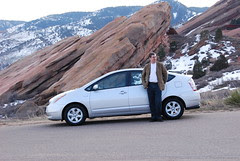 I have been very impressed with both. I have written in the past about the geotechnology in my previous car, an Infiniti FX35, and the navigation system in my Prius provides a significant jump in functionality and ease of use from the (three year old) one in my Infiniti. I'll probably write a more detailed review on this in future, but you can see a few photos of both the Prius and the BlackBerry in action to get an idea. Just like the BlackBerry, the Prius includes integration with a telephone, and the photos show an example where I used my car to track down the nearest Cingular store which had a BlackBerry 8800 in stock, using the integrated dialing features to call the stores in order of distance from my current location. And by the way, the Prius drives really nicely too, and does 45-50 mpg - I highly recommend it!

I have also been very impressed by the BlackBerry 8800 so far, and in particular by the telenav application which uses the built in GPS. It has rich functionality and a simple user interface. So far I have found the database of businesses to be very complete and up to date. Last week in Huntsville I was going to a baseball game with a group of people from work, and I just searched for "baseball" and it returned not only the Huntsville Stars stadium, which is where I wanted to go, but also the Huntsville Sports Academy (which is a baseball school but does not include baseball in the name), which moved to a new location just three months ago, and telenav showed it at the correct address. When you navigate a route, it automatically downloads information on the route in advance to ensure good performance - though I have found the EDGE wireless network performance to be very good in general. It gives you voice directions which are loud and clear and even says street names (e.g. "Turn left on 20th street"), which most navigation systems don't do. Telenav also offers Telenav Track, a very reasonably priced mobile workforce management system. I plan to look at that in more detail, but I think that this type of device and application could be very disruptive to traditional workforce management systems, which are typically fairly large and complex enterprise software systems.

Both the Prius and the BlackBerry are good examples of the continuing integration of sophisticated location based technology into mainstream devices. I see great potential for the BlackBerry and similar devices, and will write more about other location based applications for it in future posts, including BlackBerry Maps, Google Maps for Mobile, and Spot for BlackBerry, the last of which claims an impressive list of features, including the ability to record tracklogs (something I want in order to be able to geotag my photos using RoboGeo without needing a separate handheld GPS), and even the ability to read data from WMS servers! More to come ...