I just wrapped up the closing panel at the 34th and last GITA "annual conference" (officially known as the geospatial solutions conference these days), which was quite a sad moment for me. I attended my first GITA (then AM/FM, Automated Mapping and Facilities Management) conference in 1992, and have only missed one since then. Especially back in the 1990s, and into the early 2000s, it was always the highlight of the year in the part of the geospatial industry that I worked in, focused on organizations managing infrastructure like gas and electric utilities, telcos, water and waste water and local government. I should say before going too far that this does not mean that GITA the organization is going away. They already do a lot more than just the annual conference, and are actively looking at various new opportunities - I'll come back to this below. 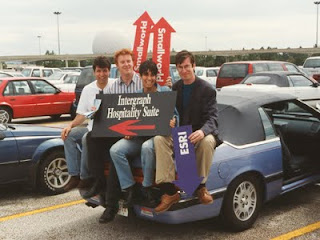 Above is a portion of the Smallworld team that attended the 1993 conference, which is where we launched Smallworld in the US, and I moved over here from the UK later that year. From left to right you see Sean Newell, Jay Cadman, Ali Newell and me. Somehow we retrieved various signs at the end of the conference, in order to illustrate our predictions for the GIS industry :). In the late 90s attendance would be over 3000 people I think. It was the place to go for organizations selecting new GIS products. I remember sometime in the late 90s we upped the ante at Smallworld by giving away a car at the show (a new Volkswagen beetle) ... will have to try to dig out some of the (pre-digital) pics of that! And I gave many presentations at GITA over the years.

But since 2005 the GITA "annual conference" (under a couple of different names) has had declining attendance, and so GITA Executive Director Bob Samborski and the GITA Board, which I rejoined this year after a few years off it, reluctantly concluded that the right thing to do was to make this the last annual conference in its current form (a decision I agree with). Here's a picture of me and Bob with then Denver Mayor, now Colorado Governor, John Hickenlooper at the GIS in the Rockies conference in 2004... GITA has always been associated with the annual conference which was historically its biggest event, but for quite some time now this has just been a part of its activities. It also runs the GIS for Oil and Gas conference, now in its 20th year, which remains strong and will continue. And international affiliates such as GITA Australia and New Zealand continue to be strong. This year it is also playing a leading role in organizing the FOSS4G conference, for which I am conference chair. It organizes a successful program called GECCo, Geospatially Enabling Community Collaboration, to encourage collaboration between infrastructure organizations, with a particular focus on emergency response. GITA recently received a grant from the Department of Homeland Security to expand the GECCo program and organize quarterly workshops over the next 3 years. GITA has an active network of regional chapters that organize local events, and those will likely receive more focus now. Also I think there will be a stronger focus on delivery of educational material via various online channels. And there are a number of other ideas under consideration for new events and alliances with other industry organizations.

So GITA will continue, but with a somewhat modified focus. Things are changing rapidly in the geospatial world and I agree it's the right decision, but it's still a bit sad for those of us who have had such a long association with the annual conference. Everyone involved can be proud of what the GITA conference has contributed to the growth of the industry over the last 34 years! (Yes, probably longer than a lot of you "neo" readers have been alive!).
Posted by Peter Batty at 3:51 PM